I have my DJ'ing setup shared across 2 PC's, one PC at home to use as a permanent setup and the other on my laptop to use at gigs.  Its a bit hairy but it is possible to do this for Traktor and iTunes using good old dropbox.

– Only 1 PC can be used to run iTunes and Traktor at a time.  The files each PC uses are common and shared via dropbox so you don't want both PC's trying to update the files ever at the same time or plenty of likelihood dropbox will get in a state trying to decide which is the most recent and things might get damaged.

– iTunes and Traktor need to be kept the same version on both PC's.  When updating one make sure you update the other (see notes on this below).

– If you choose to use this as a guide make sure you backup everything you move or tweak just in case.  I'm a developer so find this stuff not too painful, but the changes being made here can cause serious cock ups to your setup if mistakes are made or if iTunes or Traktor have changed something since I last updated this.  Backup backup backup.  On the plus side, once done you then have dropbox providing backup and rollback to previous version for files should you ever need it (if you pay for your dropbox account).

I have a slightly unconventional dropbox setup because I want my dropbox folder in my C drive and to start with an underscore so its at the top, so its here for me "C:\_Dropbox\Dropbox\".  Just a personal preference and you can just change the beginning of paths I show below to the same folders in your own dropbox folder or change as you wish.

Telling iTunes to use the iTunes folder in Dropbox, not its default "C:\Users\adam\Music\iTunes"

This is a hidden feature in iTunes but its been there for a long time and is an official method.

I use the following as my iTunes folder: "C:\_Dropbox\Dropbox\_Music\iTunes\".  I simply moved my original iTunes folder to this location inside dropbox when I first did this change.

When you start iTunes hold the shift key, it will then prompt to ask where the folder is.  Point it to the new location, its that easy.

I then delete the contents of the default location to avoid any future confusion, although you could leave it and it just won't be used.

Telling Traktor to use the Dropbox folders

This is pretty straightforward for Traktor.  By default Traktor will use:

These are the folders locations I use, again the first time I did this I simply moved the files from their original default location to the new location in the dropbox folder)

Once I did this on the 1st PC, which originally was my sole PC, all was fine.  I got Traktor to do a consistency check and it spent time scanning files I guess because they'd moved but in the end all of my previous cuepoints etc we're still there – it was clever enough to know the files we're the same even though the path had changed, although it seems to want to scan them again anyway.  One the 2nd PC, which had never had this iTunes library or Traktor on it, again Traktor wanted to re-scan all the files but after giving it time to do that and a couple of restarts it behaves just like the main 1st PC and all of the cuepoints, comments etc are there.  It seems traktor has some sort of local data store on a PC that isn't part of the basic root dir where it stores its scans of the music files, maybe its PC hardware related to a specific machine, who knows.

Update Traktor as normal.  When you then run it the first time it will prompt asking what to do with its setup files.

You want to keep your existing settings 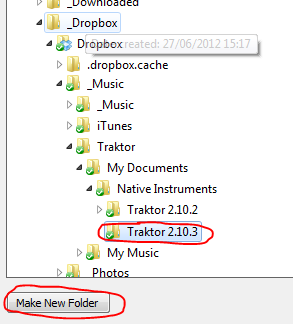 Update Traktor as normal.  When you then run it the first time it will prompt asking what to do with its setup files.

You want to keep your existing settings

You do NOT want to use the Traktor default file locations, you want to use your own file locations.  It will then ask you where you want to save the new version of the files too.  To avoid a potential conflict or cock up I simply create a new temporary directory somewhere and let it use that.  Once its complete copying all of the files over to the new directory I get it I go into Trackor Preferences > File Management > Root Dir and I change it to the directory the master used and then delete the temporary directory.

open all | close all